Holidays always present us with lots of interesting things to consider. What are we celebrating, and why? And what parts of the holidays actually help us to celebrate those reasons, and what parts hurt it? Christmas has acquired so many varying traditions and elements, sometimes it’s hard to sift through it all, and before you know it, the real meaning of it, the birth of Christ, has become so buried under the proverbial haystack of random traditions that He becomes an afterthought.

Ironically, however, one of the most demonized and perceived “opponents” on the purity of the Christmas story is, in actuality, probably the closest link we have with the true meaning and purpose of Christmas. I’m talking about Santa Claus.

Now, like most adults, we make plenty of jokes about Santa and the elves and Rudolph and all that stuff, but man, sometimes I see a real disdain from people (mostly Christians) toward Santa, as if we hold him responsible for single-handedly ruined the meaning of Christmas. This is nothing new, and as a matter of fact a predominantly Christian distaste for Santa goes back as far as even the 16th Century. But it’s funny to me how even today we easily ignore how much we ourselves put so much stock in buying gifts and holiday sales and family drama and arguing over where we spend Christmas and making sure we utilize our Christmas vacation time and making sure we get our Christmas bonus; but no, it’s definitely none of those things that have taken the focus of Christmas away from Christ. No, it’s definitely Santa…it’s all his fault.

But I want to tell you why I don’t hate Santa…and actually why I like him. Granted, in my house, my sons, Micah and Liam, are 10 and 7 years old respectively, and we have never done the whole “Santa comes down the chimney on Christmas” thing. For that matter we never even pretended that he is a real, living guy up at the North Pole. Even Micah, when he was 5, only knew him as “the Christmas Guy.” He didn’t even know his name. But I do actually like the idea of Santa being a part of our Christmas tradition in some way, even if just a small part as a reminder of what Christmas really is all about.

So let me share with you how Santa can actually deepen your enjoyment of this Christmas season.

Santa Claus was a slow morph from a fellow named Nicholas. Nicholas was from a place called Myra, which is modern day Turkey. He was a short man, about 5’5″ tall, as forensic studies of his bones have shown, and he lived in the 4th century, practically a contemporary to St. Patrick of Ireland and St. Augustine. Nicholas, from an early age, became obsessed with his faith in Christ, and he lived it out to the most extreme degree, and eventually became the Bishop of Myra. Through the years, as his legend changed and was modified for every culture, eventually somewhere in Scandinavian Europe his name was translated and eventually was anglicized into “Santa Claus,” with the name “Santa” of course being “Saint” and “Claus” being a variant of “Nicholas” (you can see the relation of the name “Claus” in the latter part of the name “Nicholas” in the form of “cholas”).

2. Nicholas extended jesus' mercy and grace towards the poor by giving them gifts.

The tradition of Santa being a gift-giver comes from the real life Nicholas. He was literally a “Secret Santa,” as he would often put coins and gifts in people’s shoes which were left on their doorstep at night. He would leave food on doorsteps of families that had need. And in his most notable act, he bought the dowry (a large “down-payment” for marriage, so to speak, given to the father of a young girl from an interested man as a guarantee of marriage) of three young girls so that they wouldn’t have to be pushed into a life of prostitution.Nicholas did this all out of his passion for Christ and the great gift of salvation that Nicholas so appreciated.

3. Nicholas punched out a guy named arius in front of 300 other bishops because arius taught that Jesus wasn't Equally God with the Father.

In 325 A.D., there was a teacher named Arius who was teaching that Christ wasn’t equal with God the Father, but rather that Jesus was a created being and had a beginning, unlike God the Father. Over 300 Bishops from around the modern world at the time gathered for what is called the Council of Nicea, with one of the main topics based around this question. As the story goes, Arius was speaking to the group, sharing his view when, unable to contain his anger at the untruthful words coming out of Arius’ mouth, Nicholas got up, went toward Arius, and punched him in the face (as an aside, when forensic studies were done on his bones, it was concluded that Nicholas had also at some point suffered a broken nose. Santa was a brawler!).

Apparently he said that he could not contain himself hearing such nonsense. He was excused from the meeting (some accounts were that he was even put under temporary arrest) to prevent further outburst.  Thankfully, the Council did agree with Nicholas’ view, and Arius’ teaching was denounced as a heresy. This Council meeting is where we got the Nicene Creed, which was also signed by Nicholas, which properly educates us about the nature of Christ.

Now Imagine if it were Billy Graham 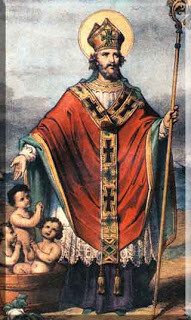 He died peacefully at age 76 on December 6th (the main reason why Nicholas is closely identified with Christmas is the proximity of his “Feast Day” with Christmas), and his remains are currently entombed in Venice, Italy. Sadly, however, his legacy itself became a martyr as we’ve put to death the great testimony of his faith as we instead inadvertently use him as a scapegoat for the secularization of Christmas. Would Saint Nicholas be bummed that he’s been so marginalized as a non-faith based figure at Christmastime and minimized and pigeonholed as a gluttonous home invader who holes himself up in a barren wasteland 364 days per year? I’m sure he would be. And I gotta be honest, if it were me and I was given the unbelievable privilege to have my testimony of charity for the cause of Christ be told throughout the world for centuries to come, sure I would be bummed to know that it gets secularized and turned into a marketing ploy; however more than that, I would be devastated to know that my future brothers and sisters in Christ would be the front runners in voiding the many deeds and service I did in the name of Christ for the sake of the poor and needy in my community. I would be so saddened to know that my name and legacy would become vilified in the eyes of other believers. My hope would be that my future fellow believers would protect my legacy and bring Christ back to the center of my story, because it was for Christ that Nicholas did what he did.

Imagine, if you will, the name “Billy Graham” leaving a bad taste in the mouth of Christians in 500 years. What a travesty if those believers allow that to happen and throw the baby out with the bathwater because culture begins to use Billy’s name to sell some more products, making it as if Billy was the worst thing to happen to Christianity.

So, instead of stringing good ol’ Saint Nick up the flagpole, I would rather like to appreciate what he did in his life to bring honor to Christ. Imagine if instead of condemning Santa to our kids, we actually taught them what he really represented, and used his example to teach our kids at Christmas time. Imagine if we actually took heed to Saint Nick’s heart and instead aimed, as Paul said, for us to “follow [him] as [he] follows Christ.” Imagine the great conversations our kids would have at their schools when the Santa topic gets brought up. Our kids would not just be telling their friends what Santa is really all about, but they would then be telling their friends what Christmas is all about. I want to raise my kids teaching them that yes, that not only is the message of Christmas about God’s gift to the world, but also that the message of Santa is also the message of Christ: an undeserved, unexpected gift, unmerited gift.

Do you have to incorporate Santa in your Christmas? Not at all. But if your kids ask, what a much better alternative it is to be able to tell them the truth: that Nicholas loved Jesus, served the poor in his community selflessly because of his thankfulness for his own salvation, and of course, that he punched a guy out for not giving props to Jesus.

I for one, am looking forward to meeting the man, and I can only hope that I leave a fraction of the legacy he left.