Part 16: My Last Day at theMovement

Part 16 of a Blog Series Called “How Did We Get Here?” (click here to go to the beginning), the Story of How I was Called to Start Life Mission Church and What Got Us to Where We are Today.

So I’m gonna be honest here…I don’t even like typing about this part! But here goes…

The morning of the first public announcement, October 7th, was a day and an event that I never thought I would see:  I led worship for the last time at theMovement. But what made it even more strange for me, however, is that hardly anyone knew it. It was surreal.

That was really strange. The band knew. The staff knew. The folks that were at the house the night before knew. But the other 800 or so people had no idea. For us on stage, it was emotional. Trace even joked that it wouldn’t be the set list that he would have picked for “Jobey’s last Sunday.” I led a song, Pat led a song, and Drew led a song. Nothing was out of the ordinary. I led “All I Can Do,” which is an awesome, lazy, ballad-like song. But no big signature rock and roll song, no “Fight Song,” no reggae song, no Celtic song.

And in a way, to be honest, it was nice. No hype, no pomp and circumstance. It was very unceremonious. And best of all, it was shared with one guy that would continue in my place and another that would eventually join me in this new chapter of life. It was good, and I knew I needed to enjoy it, because the hard part was coming quickly. So I sang my heart out during “All I Can Do.”

After the last service, we’d planned a 1pm church family meeting to make the announcement. Some incredible home-made-from-scratch desserts were prepared, but I couldn’t touch them. I was sick to my stomach. I probably was as pale as a ghost. Or pale as an Irishman…which are paler than ghosts. Shoot, I was probably as pale as an Irish ghost. I was pale, that’s all I know. 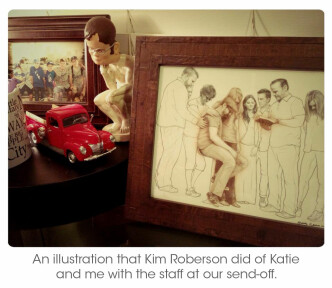 When Jeremy called us up on stage and gave me the mic, I don’t even remember what I said (thankfully, it was recorded here). The whole afternoon was a blur. And, sorry to be graphic, but you know when you really are sick, you feel much better after just “getting it out” of you? That’s how it was. It was great to finally let the cat out of the bag.

Over the next week, the phone calls, emails, and text messages began, and on October 14th, we made the same announcement to the whole church body. And that day was the last time I would call theMovement “home.”

That night, after the Sunday night service concluded, I made all the official switches. I changed my email from jobey [@] themovement.org, which it had been for 11 years, to jobey [@] lifemission.tv, which looked really strange. The first few days I kept switching back to jobey [@] themovement.org account because it was just too weird. And as if I didn’t think I’d already passed the point of no return by announcing it to the church, I made my first Facebook status update announcing it. It was a status update that I stared at on my screen for probably 5 minutes before I had to walk away from it, coming back 5 minutes later only to look at it again for another 5 minutes, and then finally closing my eyes and clicking “Post.”

And now, it was a matter of waiting. And praying. And planning. But mostly praying and waiting. For me, it was waiting for the big question to be answered:

“Lord, are You going to bring people?”

What is one of the biggest changes you’ve gone through that you knew was the right thing for you, but you also had very little assurance that it would work out the way you hope it would? How did that affect your trust in Christ? Did you become more dependent on your own ability and ingenuity and self-preservation, or did you plant yourself more firmly on Christ?

Everything Comes Into Focus:  I thought I had a pretty good idea of what the task at hand was…but I really hadn’t…at least not yet.