Part 11: It Was There All Along

Part 11 of a Blog Series Called “How Did We Get Here?” (click here to go to the beginning), the Story of How I was Called to Start Life Mission Church and What Got Us to Where We are Today.

Late one night, I had just finished a book called Spurgeon on Leadership about the leadership practices and principles of C.H. Spurgeon, my favorite preacher of the modern church. On a whim, I decided to pull out a book that would be something different, a departure from the maxims I’d found in Spurgeon’s leadership biography. The book was called Visioneering by Andy Stanley. I didn’t expect to get much out of it, because I thought the book would be about how to cast your vision and share it and sustain it. The problem with that for me, however, was that I didn’t have a vision, so I wasn’t sure if the book would even be worth reading.

Turns out, it was.

The first chapter dealt with the bottom floor: what is a vision? What’s the difference between a good idea and a vision from God?

He had my attention.

I knew that me leading a church was definitely an idea; and to my friends whom I had spoken with, it was even a good idea. But I didn’t want a good idea. I wanted a God idea. So I kept reading.

Within the first couple chapters, he started laying out the story of Nehemiah, and how the burden he had to rebuild the walls of Jerusalem started to show itself as a good idea, but had eventually fully formed as a God idea.

Some of the similarities were uncanny. Nehemiah didn’t tell anyone for four months of his “idea.” For me, I kept it a secret for exactly four months before even telling Katie. Nehemiah was the cup-bearer for the king. This is significant because he couldn’t just sneak out unnoticed and go “do his thing.” People would notice! Likewise, I couldn’t just go “start a church” even if I wanted to! This would be a huge deal that lots of people would notice! It even mentioned how everyone in Nehemiah’s life knew that something was bothering him, just as I knew all my friends knew that there was something bothering me.

But by chapter three, I had yet another Never-Ending Story moment. As I read the words on the page, they were like a mirror image of all the thoughts and wrestling that I had been experiencing. They gave a voice or an outlet for what had been stirring. Again, like before, it wasn’t the words that convinced me of anything, but rather it’s that these words were simply exposing something that was already in my heart, but something that I didn’t even know was in my heart. He was reading my mail; revealing, describing, confirming and shining light on exactly what was already in my heart, but had been hidden, at least from me.

It was scary. It was phenomenal. It was creepy.

It was God revealing His idea for my life.

The book asked questions, like ” is this idea just something that could be, or is it something that should be?” “Was there was a deep sense of conviction, a picture of a preferred future, and a preferred future that necessitates change that requires a major step of faith and trust?” I could go on and on into even the smallest details of the book, but there came a point when a collection of phrases and sentences started bringing things into more focus. It talked about how a “God idea” begins to feel like a moral imperative, something that you really have no choice in, something that is quite possibly even a bad career move, full of risk and future anguish, because it is indeed something that is completely out of reach for you, something only God could do.

Is it something that you would really be willing to bet your entire life on?

And in that very moment, in an instant, I knew it. I didn’t just know it, though. I knew it. It’s as if the lights came on, and I realized it was there all along, but that it was, as Ted Lawler had put it just two and a half months before, just gestating, hidden beneath the surface. This, God was showing me, is what He made me for. I’ve never done it, and I never wanted to do it, but it’s what He made me for.

This small seed of faith was taking root when I couldn’t see it, and it was finally breaking through the surface. 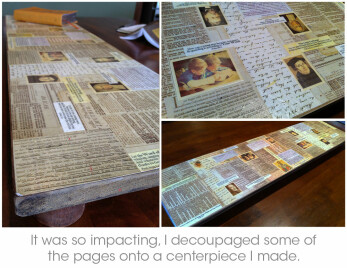 I remember that night like it was yesterday. I remember it so clearly, even the specific posture I was in, the lighting on the page, the tears that started coming down my cheeks, and the sense of awe; and the sense of fear. It was a holy moment in my life, a moment of such clarity and color.

I felt like I could breathe for the first time in six months. I could hardly believe it. There was such a huge relief in my heart. I finally knew. And it was the clearest thing in my life. So clear that I knew that this was indeed something that I would bet my life on it…and my list on it.

I woke up the next morning and went downstairs into the kitchen where Katie was making breakfast. I couldn’t open the book fast enough to start reading her the pages and sections that lit me up. After reading a few selections, she looked at me and said, “did you write that book?”

It was that crazy. All the thoughts that I believed were unique to me were on these pages in black and white, and Katie recognized it instantly. She knew those words, and knew that voice, and she knew it wasn’t Andy Stanley’s voice, but it was mine. And most importantly, she knew what it meant.

We’re going to be planting a church.

Is there something that has been weighing on your heart that you think might be a “God idea” in your life, but you aren’t sure? Have you been faithful in continually seeking, asking, and praying for direction and guidance? Don’t give up! What else can you do to faithfully pursue His direction in your life? It may take time, but know that God will light your path and guide you.

Buckle Up: The next 7 months would prove to be quite a roller coaster for me…