A little “PS” to my ”The Real Santa Claus” post…I was just going to add it in, but I figured it was worth its own post. 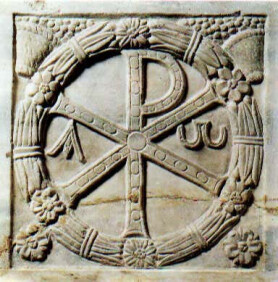 I use the phrase ”Xmas“ quite a bit, much to the chagrin of many around me. But just in case anyone was wondering, the usage of the word “Xmas” has nothing to do with “taking ‘Christ’ out of Christmas.” For at least 1000 years, the Greek letter ”X” (pronounced “kai”) has been used to denote the word “Christ,” being that it is the first letter in the word “Christ.”  We see it on the ol’ Christian Fish that so many of us sport on our cars, represented by a Greek acronym that spells out ”IXOYE,” which when pronounced is the Greek is pronounced “icthus” and is the Greek word for ”fish,” but as an acronym stands for “Jesus Christ, God’s Son, Savior.”

Even in later years, in the 15th through 17th Centuries, the words “Christians“ and ”Christianity“ were written as ”Xians“ and ”Xianity.”  In an even more interesting twist, back in the 16 and 1700′s, the name “Christine” and  ”Christopher“ were traditionally spelled ”Xene“ and ”Xopher.”  The name ”Xena,” as in “Xena the Princess Warrior“ is actually a mispronunciation of what her real name should be: ”Christina the Princess Warrior.”  Not quite as cool though, I must say (of course her parents can pronounce her name however they want, but the traditional way to pronounce “Xena” is “Christina”).

In Catholic, Protestant, and Orthodox churches, the symbol called the “labarum“ is a mixture of the Greek letters Chi (X) and Rho (P), and is used on vestments, artwork, literature, and carvings as a symbol that represents Jesus Christ.

The point of all of this?  None, really.  However, I do find that Christmas is just a little more enjoyable when we aren’t worrying about the fact that many people will write out “Christmas,” and many will write out “Xmas.” Both of them are just fine, as long as our aim is to celebrate the birth of Christ.

Fellow Xians, enjoy your freedom in X this Xmas.  RelaX a bit.