Today, April 8th, is the 68th Anniversary of the death of Dietrich Bonhoeffer, a German Lutheran pastor and theologian during the Nazi regime.  In one of his great and many quotes on discipleship and the cost of following Christ, he once said:

The cross is not the terrible end to an otherwise God-fearing and happy life.

But the cross meets us at the beginning of our communion with Him.

When Christ calls a man, He bids him, ‘come and die with Me.’ 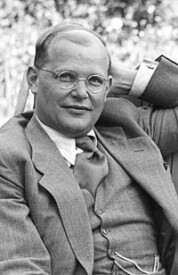 Due to his faith’s conviction to resist the Nazi regime, Dietrich was executed by hanging as a martyr after two years in a concentration camp by the Nazi regime; sadly, it was only 23 days before the Nazi regime would admit defeat.

He was condemned to death on April 8, 1945.  He would be stripped naked, led into the gallows, and fitted with a thin wire for his strangulation.  Upon his death, the doctor at the concentration camp who witnessed the execution wrote:

I saw Pastor Bonhoeffer… kneeling on the floor praying fervently to God. I was most deeply moved by the way this lovable man prayed, so devout and so certain that God heard his prayer. At the place of execution, he again said a short prayer and then climbed the few steps to the gallows, brave and composed. His death ensued after a few seconds. In the almost fifty years that I worked as a doctor, I have hardly ever seen a man die so entirely submissive to the will of God. [1]

Jesus was his Christus exemplar.