Adding Depth to Your Enjoyment of Hallowe’en

Navigating a fallen culture is no easy task. We are pilgrims and sojourners in this life, and we are called to be “in the world, yet not of the world,” just as Christ was. We are sent, just as He was sent.  And at the same time, Christ also enjoyed many earthly blessings that He, while in heaven before His incarnation, had no need of. Things like the enjoyment of food, singing songs with friends, sleep, and going to parties.

So how do we enjoy life while being missionaries? This will look a bit different for everyone, for a number of reasons, but a great starting point is that when it comes to culture, a good rule of thumb to use is the idea of “Receive, Reject, or Redeem.” 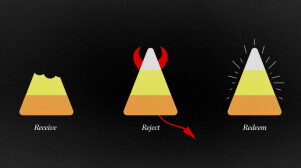 So receive and reject are pretty clear cut, but what about the “gray areas”?  Things like movies, music, holidays, hobbies, alcohol, etc. are all technically neutral, but they can go either way in dishonoring or honoring God. A good question we can ask ourselves is, can it be redeemed?  Using Hallowe’en as an example, I’d like to give you a few ways you can enjoy Hallowe’en, and even use it for a specific purpose to the glory of God. Even if you choose not to celebrate Hallowe’en, these are all really good things to be aware of as you engage your friends and family this Hallowe’en as a means to sharing the Gospel in a loving and non-judgmental way.

1). Enjoy it as a Day of Thanksgiving

History:  The background of Hallowe’en is very mixed with Christian, secular, and pagan roots, much like Christmas and Easter. Originally, going back at least to 270 A.D. or maybe earlier, it was an Irish celebration called “Samhain” (pronounced “sow-in” (“sow” being pronounced like “cow”)), which, generally translated means “summer’s end assembly,” or “harvest festival.”

Back then, without the luxury of modern indoor heating, winter was a very treacherous, fearful time for people. When winter would hit, people in these ancient villages would wonder who would not make it out of winter alive. In that day, November 1 was considered the unofficial start of winter, and so these Celts would gather food from the summer and autumn harvest and get together the night before, on October 31st, for a large party and what really was the original “Thanksgiving” before we had our modern North American holiday.

These friends and family would enjoy food from the harvest, giving thanks and hoping that they would all make it through the winter. What began then, also, was a tradition to dress up like your ancestors who had passed away before you. It was a tribute to them, being thankful for their legacy, and acknowledging that if the encroaching winter takes your life, you will be with your ancestors again.

2). Know Some of the Christian History

History: The church had their day to commemorate and remember previously departed saints called “All Saints’ Day,” which was introduced in 609 A.D.  But because the culture was already celebrating Samhain which celebrated their current life with the feast of the harvest, as well as simultaneously celebrating and remembering their previous ancestors, Pope Gregory IV decided to move All Saints’ Day in 835 A.D. from May 13th to coincide with what was already going on in culture during Samhain on November 1st.

In modern times, to get away from the darker side of Hallowe’en, Christians have adopted other names, primarily “harvest festival,” “fall festival,” and I’ve even seen “Jesusween” (sadly, I’m not kidding). Ironically, “harvest festival” (Samhain) was the original secular name for this community party, and it was actually the church that renamed the celebrations of October 31st as “All Hollows’ Evening,” which means “All Holys’ Evening.” This was eventually shortened to “Hallowe’en” by 1745.  Hallowe’en was simply “All Hollows’ Eve,” celebrated the evening before, like our Christmas Eve. 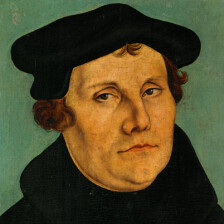 History:  In the early 1500’s, an Augustinian Catholic monk named Martin Luther was getting fed up with what he had increasingly been seeing as a misrepresentation of the Gospel in the Catholic Church. His eyes were being opened in his study of the Scriptures, and he was seeing the Gospel in a way he had never before. He wrote out 95 statements that opposed specific teachings of the Catholic Church, and on October 31, 1517, he nailed it, which became known as the “95 Theses”, to the front door of the church in Wittenburg, Germany, and inadvertently launched the Reformation.

This event is the single most important event in church history in the past 500 years, and our lives have been radically and very directly affected by it. Today, many churches celebrate October 31st as “Reformation Day.”

History:  In ancient Ireland, turnips were originally used as Jack-o-Lanterns.  When Hallowe’en was exported to America in the late 1800’s, the food of choice became a pumpkin (leave it to us Americans to always go bigger and more excessive!). It’s something that many kids enjoy doing and have fun creating.

History:  Some of the folks back in the day believed that since it was the transition from autumn to winter, that on Samhain (the pre-Christian Hallowe’en), the souls of the dead could pass into the land of the living. But the fact of the matter is that October 31 is no more evil than any other day of the year, and demons have no more power than any other day. 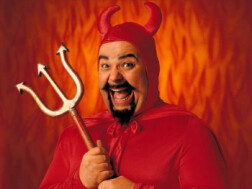 In most recent years, Christians have discouraged kids from dressing up as Satan or anything evil. While I do believe that there is a disturbing line that we can cross, the irony is that it was the church who originally encouraged people to dress this way on Hallowe’en (after Samhain became Christianized).  The reason? It was meant to be a mockery of Satan. Did you really think that a guy with a pitchfork in a red jump suit was a flattering and intimidating image of Satan?  They dressed up this way as a reminder that “He who is in me is greater than he who is in the world.”

History:  In many Christian circles, churches have had a very legalistic and judgmental approach to Hallowe’en. Any participation in it was deemed as demonic, anti-Christian, and ungodly. Thankfully, the church has embraced her role as being a sent church and sees Hallowe’en as being one of the most prime times of the year to meet neighbors, be generous, and be a witness of Christ.

History:  Though it’s true that October 31st is no more evil than any other day, it is also true that there are lots of spooky things out there that aren’t normally in stores and on TV and in neighborhoods. Know your children. Some are more sensitive than others. Use every opportunity to teach them and help them mature and grow and become strong in understanding concepts like death, hell, evil, and darkness, but most especially the power of God over all of them.  Don’t allow them to do anything that is truly of the occult, such as Ouija boards, séances, and other activities that many kids like to experiment with on Halloween. Be aware of what they are doing and why.

As with everything in this world, there are many things we can receive, many we should reject, and many that we can redeem. Not everything with Hallowe’en should be embraced, yet much of Hallowe’en can be an opportunity to glorify God in big ways. For my family, it’s a time of thanksgiving, enjoying friends and family, having fun, learning about our family heritage as well as our spiritual heritage and church history, as well as a great time to be in the community and share the Gospel. Also, remember that not everyone enjoys Hallowe’en, and for a number of reasons.  No one is more (or less) spiritual for rejecting Hallowe’en, and no one is more (or less) spiritual for receiving Hallowe’en.

For more reading and resources, check out these websites:

On its history and whether we should participate, from www.carm.org: Click Here